The M3300 single system SSD tester is currently available in configurations to support up to 32 units of 2.5”, and 1.8” SATA & SAS devices and up to 16 units of 3.5” SATA & SAS devices. Multiple M3300 units can be networked together using 1GB Ethernet. UUT's (Units Under Test) are plugged into an easily changed socket adapters. The UUT connector interface is the standard SAS connector which also supports SATA drives. Other connectors such as the micro SATA, mini SATA, and custom SATA connectors can be easily accommodated. 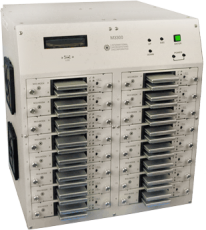