The TEAC AL- R8500 Blu- Raykopierroboter is ideal for anyone who wants to burn a lot of CDs in a short time .

This firing robot has a stand -alone solution , so that means you do not need a separate computer to this robot zubedienen .
The ease of use is also found in its LCD touchpad again, but the TEAC AL -8500 Blu- Ray has also also
a networking solution with 8 burners and a 550-disc capacity .

This small Wunderwerck the Technick also houses a hard drive for storing Images in itself.
In addition , the AL -R series has which enables unattended different copies of different masters to create a batch - mode function . All this therefore offers maximum flexibility.

But that 's not all , by its small size is the AL- R8500 on almost every desk a little Plätschen for themselves. 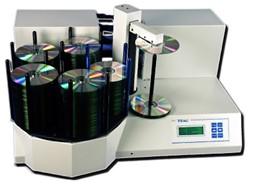