The V92 Digi Tapemaster is a compact, low noise, manually operated unit, which sits neatly on the tabletop. No compromise has been made when it comes to performance. With erasure levels below – 75dB for high-energy metal tapes and below – 90dB on standard oxide tapes, complete erasure is assured every time. Erasure time is also extremely quick, taking as little as 10 seconds to erase each cassette.

The V92 Digi Tapemaster provides a truly universal, desktop, magnetic media degaussing facility that meets the needs of a diverse range of user group using a wide range of audio, video and computer tapes, and cassettes.

Please note the following suggestions when using a Degausser:

Remove your wristwatch when using the Degausser. Direct exposure to the magnetic field may damage some watches.

Do not place your wallet or purse containing credit or phone cards directly on or above the conveyor belt. Magnetic strip cards are very easy to erase. However, having a wallet in your back pants pocket while using the Degausser will not erase the cards.

Store videotapes you do not intend to erase approximately four feet from the Degausser. This will eliminate the opportunity for the operator to accidentally run “good” tapes through the Degausser.

When erasing tapes, place them on the left edge of the belt (as you face the machine). In order they may travel the full length of the conveyor belt for quality erasure.

Do not operate the Degausser if you have a pacemaker.

An alternating current (AC) bulk eraser (Degausser) is used for complete erasure of data and other signals on magnetic media. Degaussing is a process where magnetic media is exposed to a powerful, alternating magnetic field. Degaussing removes any previously written data, leaving the media in a magnetically randomized (blank) state.

The Degausser must subject the media to an alternating magnetic field of sufficient intensity to saturate the media. Then the Degausser by slowly withdrawing or reducing the field leaves the magnetic media in a magnetically neutral state.

To erase recorded data, it is necessary for the strength of the degaussing field to be greater in value than the coercivity of the magnetic media. Simply stated, coercivity is the magnetic field strength, rated in oersteds (Oe), required to change the magnetic orientation of the magnetic material. Check with knowledgeable dealers or Degausser manufacturers to identify Degausser models that meet your requirements. Examples of typical coercivities for computer magnetic tapes and disks are shown in table I.

Data is typically not lost until its level has been decreased 65% to 75% (or more) below its original saturation recording signal level, dependent upon the drive system.

A complete erasure level, for most users, is considered to be 60 dB below the original signal level – this of course depends on user requirements. A 60 dB signal decrease equates to reducing the signal to one tenth of one percent of its original value.

It is very important to understand and follow the Degaussers operating instructions. This is especially important for manual units where the operator controls the media’s movement through the degaussing field. For higher coercivity media, four passes are often recommended – two passes, with a 90 degree rotation for the second pass, and then repeat the process with the media turned upside-down. Of course, these and other important operating considerations will vary with the type, power and construction of the individual Degausser models. 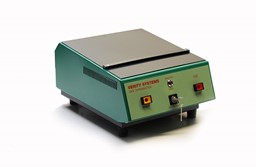